I consider myself a half-decent gardener but for some reason my forsythia bush stopped blooming about ten years ago. Maybe even longer. Actually, it only bloomed the year I bought it! The first time I saw no blossoms, I convinced myself it was just a late bloomer. But, yellow flowers never appeared. I chalked it up to it having suffered through a harsh winter.

The next spring when no flowers showed up, I assumed I’d trimmed it too much or at the wrong time. Forsythias are sensitive that way. I’d been warned not to trim more than 1/3 at a time, or no blossoms would result the next spring.

I kept it safe and hardly trimmed the bush for a couple of years. I’m sure my neighbours didn’t like that too much. It became rather tall and unruly. Yet, still no yellow flowers ever showed up in the spring.

You may question why I’d bother to keep the shrub. I had a very good answer to anyone who asked. “For the birds!”

You see, while I garden outside, I notice the flight pattern of the little sparrows and nuthatches or whatever the small birds are called.

They hide in the safety of the lilac bush near my bird feeder and fly from there to the shelter of the tall forsythia. This happens all year round.

They’re safe from stray neighbourhood cats that tend to lurk around here. The birds fly next to the evergreen trees in my yard. 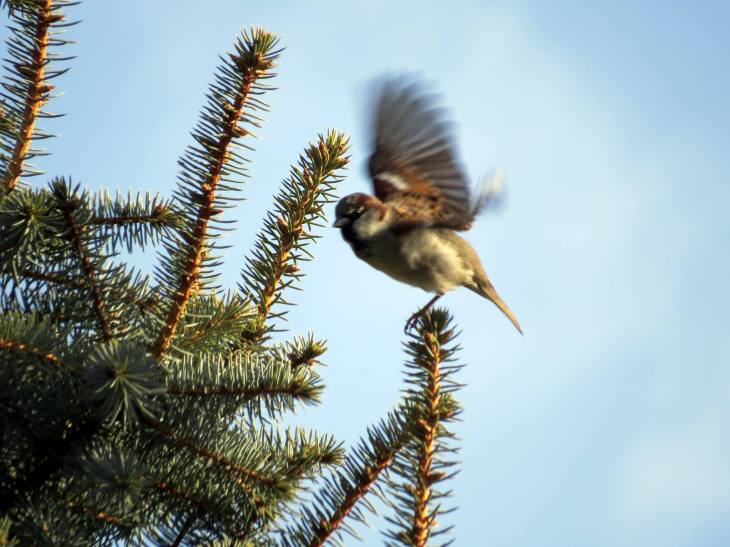 I didn’t want to change their course. Is that crazy?

Then, last year, something terrible happened. Thick webs appeared on a couple of my shrubs, including the forsythia. Whatever was spinning these webs was also sucking the life out of the branches. The shrubs were dying.

I had visions of losing all my garden. I called several forestry agencies. I inquired if they could employ a bird-friendly spray so the birds in the shrubs wouldn’t also perish. The only agency to accommodate my wishes insisted on a $75 charge for their horticulturist to check out the problem first. I agreed to pay it.

Well, I saved my money because this person never showed up.

I sprayed the small plants with a soap-based concoction, but I couldn’t reach the tall limbs of the forsythia. My husband helped me trim it—way more than 1/3, mind you! — and I continued to trim the deadwood almost daily.  It basically looked like Hell.

One of my Italian neighbours, an excellent gardener, scolded me, “Rita! What did you do? That’s a bad thing. Just rip the bush out! It’ll never live!”

But, I wanted the forsythia for the birdies. I decided if it totally perished, I was giving up on forsythias. I have pussy willow cuttings taking root now in a vase in my home. They could move on in there, no problem.

This week, tiny yellow blossoms emerged! The bush still looks half-alive and it may not survive. Still, after all the shock it went through, it’s blossoming!

That’s gardening! You may do all the right things with no success. Or, like me, do all the wrong things, and flourish!

I’ve heard it said that ‘real’ gardeners are optimistic. There’s a joke about a ninety-year-old man who plants two oak seedlings…and then looks through a catalog for a hammock to string between them.  I may not be the best gardener. But, I certainly am a ‘real’ gardener! Hope you are, too!