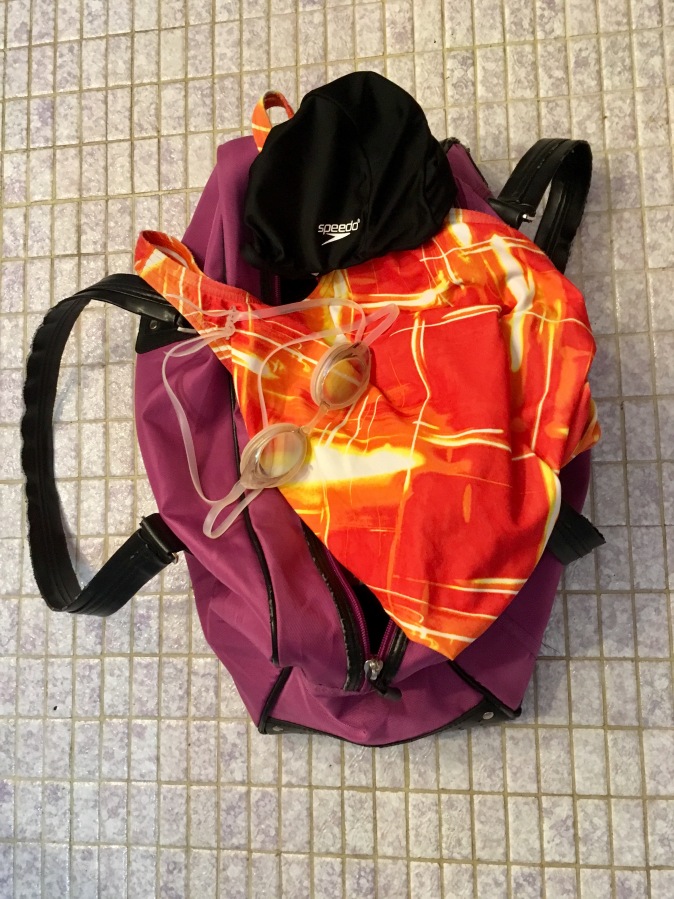 My text to hubby: “The new pool has free wifi!”
Hubby’s text to me: “U do know ur phone isn’t waterproof, right?”

It was my first time swimming laps at the new pool in town. I loved it except for the cramped changing quarters.

I glanced up from texting to see an older Asian woman. She set her towel and cane down close to my locker. I felt my space was invaded. Guess I better get used to it. Too late now.

My three words opened up a flood of memories for the woman.

“Oh, I’m fine. But, I need a cane now. Three years ago, I started with pain all through my body. The doctor said it was from my car accident…almost 50 years ago.”

She ran her hands down her chest and legs. I noticed white scars running the length of her legs now that she pointed them out.

I introduced myself. Her name was Kazuko.

Her accent was thick. I struggled to grasp all of her conversation. I moved closer, in spite of myself, and strained to make out her words.

The car accident occoured in St. Catherines, near a corner gas station. Many accidents happened there, before and since that time. A two car collision resulted in an errant car colliding with Kazuko’s car, ejecting her husband onto a neighbouring lawn. He was killed instantly.

Kazuko remained trapped in the car along with her son, 5 years of age. Another car came along, its driver gawking at Kazuko’s dead husband, and it crashed into Kazuko’s vehicle. Hit twice, Kazuko was now unconscious. Fractured skull. Two broken legs. Chest injuries. Her son suffered chest and elbow injuries.

Kazuko was unconscious for two months. She woke up, bewildered, in Metropolitan Hospital. (She’d been transferred to Windsor, where she lived, from St. Catherines.) Why was she in a hospital? What were the nurses and doctors saying? Everyone spoke English. Kazuko spoke Japanese fluently. And, English very, very poorly.

The hospital chaplain, using a translator, told Kazuko two very important things. Kazuko divulged the first item. Since she’d been sponsored to live in Canada, and her sponsor, her husband, was no longer alive, she must learn English. She needed English to obtain a job to support herself and her son.

As soon as she was discharged from the hospital, she was to catch a city bus, the following morning at 8 am to attend St. Clair College, where she’d study English.  The school arranged for childcare before school for her son.

Looking back on her life, she realized she could’ve taken an easier path. Just lived off the insurance from the car accident and been alright. But, she knew a friend who’d come into a lot of money from a car accident. She had a nice home, beautiful clothes and lacked for nothing but she wasn’t happy. She criticized the Canadian government. How could she do that?

Canada was so good to her. She worried she’d be miserable like that woman if she followed in her footsteps. But, school was hard. More difficult than she ever imagined. You see, the Japanese language has no “l” or “r” sounds.

After a short time of attending school, her son inquired, “When is Dad coming home? Why isn’t he home from work yet?”

Kazuko broke down crying. She explained that his Dad had died in the car accident. He was never coming home again. She explained further how she needed to learn English to get a job. That without a job, there’d be no money. That you needed money to live.

It took some time explaining these concepts to her little boy. Then, it all sunk in.

Kazuko took a deep breath, her eyes welling up with tears. She paused. I sat on the edge of the bench. Two acquaintances said hello to me as they entered the change room. I told them I couldn’t talk. I was listening to my new friend’s life story.

Kazuko continued. Her son looked at his Mom. He stood as tall as his little body could stand. He told her, “I am the master of the house now. If you have any problems, come to me. I will help you.”

Kazuko attended school for two and a half years. Her son kept his word. Throughout that time, he tutored his Mom in English.