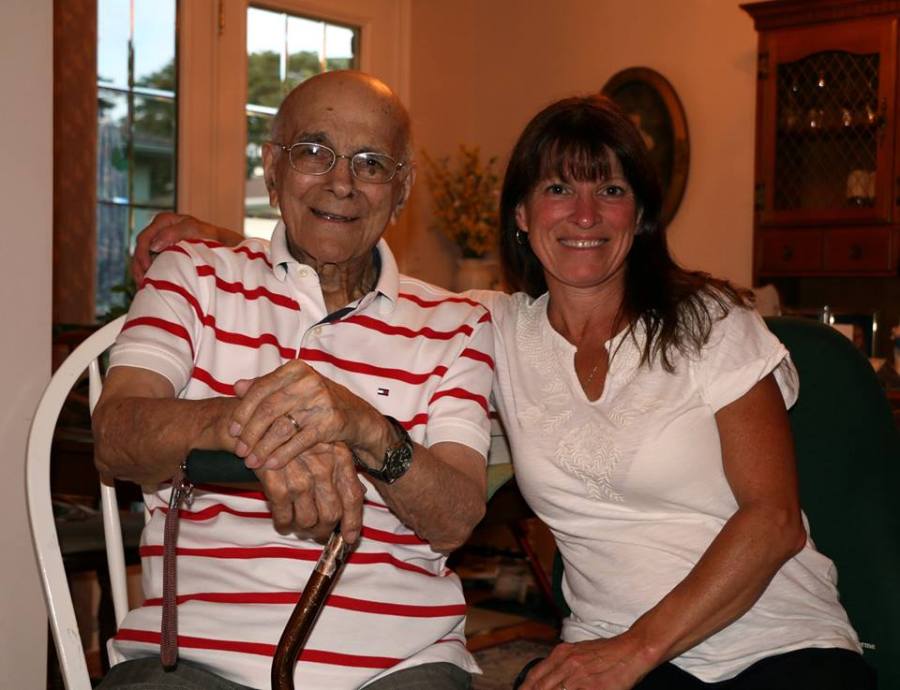 To celebrate Father’s Day, here’s some quotes from my Dad plus some of the best-loved memories from his six kids, thirteen grandchildren and now…six great-grandchildren! I hope I counted correctly. We all know Dad did math in his head.

1) “It will build character!” Usually announced when things didn’t go the way we planned.

2)  “Everything turns out for the best.” Dad was always hopeful.

3)  “There’s plenty of fish in the sea.” It’s true; I found the best fish. Tossed the others back.

6)   “Camping vacations are the best vacations.” Rondeau, Pinery, or even all the way to Prince Edward Island.

7)  “Always bring a sand-pail to the beach to wash your feet afterwards.” Words of wisdom!

10)  Trust Dad to finish an ice-cream cone that his child or grandchild couldn’t finish.

11)   “Make sure you have needle nose pliers and a multi-head screwdriver.”

12)  “Education is never a waste.” Told to me when I switched from engineering to nursing. He never made me feel like I had made a poor choice.

13)  Dad was a trendsetter before it was cool for a Dad to actually do childcare. He played with us, taught us how to ride a bike, throw a ball, drive a car & start a campfire. He let us use a  hatchet even though we almost cut our toes off.

14)  He took us for hikes on the railroad tracks and let us dive off the railroad bridge. We were never afraid with him at our side. He gave Mom a break but we didn’t realize it at the time.

15) He let my sister drive from Chatham to Wallaceburg–27 km–after ONE driving lesson. He instilled faith in us.

16)   Dad knew more about current events and pop culture than most of us. Even asked the grandchildren about Rave parties.

17)  Treated all of us six kids equally. Although the youngest ate more ice cream than the rest of us  while growing up.

18)   When women’s lib started in the 60’s, Dad believed a person could do anything if he/she worked hard enough.

19)   Instilled in us a strong sense of justice and taught us the importance of doing the right thing, instead of the easiest thing.

20)   Misplaced a grandson at a state fair and a granddaughter at Joe Louis arena in Detroit. Both were found safe!

21)   Visited his first grandchild once on a Tuesday night after work, an hour and a half drive away, because he was worried she was growing up too fast.

22)   When things didn’t work out at university, he told one of us not to worry about repaying the tuition but to pay back to his kids in the future. And those words came true.

23)   Allowed grandchildren to climb snow ‘mountains’ behind the arena.

24)  Allowed grandchildren to jump on an old couch downstairs when Nonna told them to stop.

26)   Once while babysitting a hyper granddaughter (yup, one of my daughters), Dad was exhausted. He rested on his bed and told her to grab his hand and lie down on the bed too. The hyper one pulled her arm out of the socket when she tried to get out of bed! Dad took her to a clinic and  got her all fixed up before returning her to me. To this day, that grandchild thinks it’s the funniest thing since clowns.

27)   Took in a grandchild when she was kicked out of the house. (Yup, another of my daughters). When she thanked him, he said, “What kind of Nonno would I be if I didn’t?” She thinks he’d always be the best even if he hadn’t taken her in. He always had wise and kind words to help us get through troubled times. He never gave up on his family.

Happy Father’s Day, Dad, up in Heaven! You’re the man by whom your children measure all others. Big shoes to fill!

Thanks for all you did for us, Dad! I think I’ll have some ice cream this Father’s Day and remember the cones we shared together as a family.

We have to keep traditions going, after all!

5 thoughts on “Lessons & Memories of Dad!”